A flower that’s been enjoying our recent sunny weather is the dahlia. A true garden dazzler with their many colours and many shapes. We thought this was a good week to take a closer look at this amazing flower.

Colours range from white and delicate blush pinks to truly bold strong reds and purples. But there is no such thing as a black dahlia; it’s a very dark burgundy. Many varieties have several colours. Shapes range from the simpler single flowering anemone, collarette, peony and orchid-flowering dahlias; to the double flowering varieties that include pompoms and the massively ornate cactus dahlias that can be over 30 cm in diameter.

Dahlias belong to the Asteraceae family and are related to other garden favorites such as sunflowers, chrysanthemums, zinnias, and daisies. There are more than 30 species and over 20,000 cultivars of dahlias. 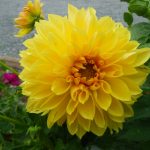 Dahlias originated as a wildflowers in the high mountain regions of Mexico and Guatemala. That’s why they naturally work well and bloom happily in our cool falls. The summer flowers are a bonus! They made their way to Spain via Spanish botanists in the 18th century who noticed dahlias growing wild on the hillsides of Mexico. Dahlias were given their name by botanist and director of the Royal Gardens of Madrid Antonio José Cavanilles, who named the flower after another botanist, Andres Dahl.

Dahlia flowers are often associated with various meanings that may range from messages of enduring grace to signals of warning.

COVID-19 Procedures:  Please do not visit the farm if you are ill or have traveled outside of BC within the last 2 weeks. Please practice social distancing at our farm. Remain 6 feet apart from other family units at all … Continue reading →