Early Offerings of the Season 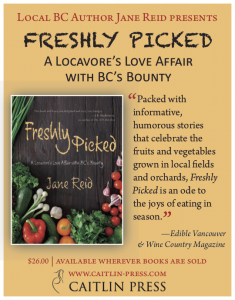 Now is the time to enjoy the first delicious offerings of the BC growing season! Rosy rhubarb, tender asparagus, fresh crisp greens, piquant chives and green onions, plus a long-time BC favourite–pink-eyed baby Warba potatoes. A feast of fresh!

First fostered in a lab in Minnesota in the 1920’s (no GMO tinkering), Warbas were bred to provide an extra early crop of potatoes in the spring. They turned out to be wildly successful when grown in the Fraser Valley. Harvested as babies, they are the first potatoes out of the ground—usually in May. Once known as “BC nuggets”, as if they were ours alone, these tasty taters are now an heirloom variety and are referred to as Warbas or “early nuggets”. Small, smooth fleshed and incredibly sweet, they do not require peeling as their skins are thin and papery. Simply rinse, cut to size and steam until fork tender. Top with butter, salt and pepper for deliciousness. Pre-cooked and wrapped in foil with butter, they get even better after a time on the BBQ. And they are unsurpassed when used in potato salad or fried on the griddle with eggs for breakfast. Enjoy Warbas often before these babies grow into adults in the fields and disappear till next year.

BC asparagus is a brief but marvellous spring vegetable not to be missed. Asparagus is one of the oddest looking vegetables and one of the oldest. People have been eating it for 4,000 years—first from the wild, then later cultivated by the ancient Romans, who adored it. Peru now grows asparagus for winter eating, but asparagus in the spring means it is grown close by and has avoided a trip of several thousand kilometres—making it fresher, tastier and tender. To make a simple, quick asparagus salad snap off tough ends of several stalks and lay on a glass pie plate (thickest ones on the outside). Add a little water, cover and microwave one or two minutes at a time until just crisp-tender. Rinse in cold water immediately, drain, and lay on a bed of fresh BC spring greens. Top with BC green onions and/or BC sliced mushrooms, then drizzle with a favourite vinaigrette and dig in.

And for dessert—try fresh BC grown rhubarb. A hardy perennial, rhubarb comes back year after year in spring. It is tough enough to thrive even in the tiny village of Atlin, tucked next to the BC’s northern border, where it grows wild all over town. To harvest, the pretty green, pinkish or red stalks are cut off at the base of the plant, and sold with or without the giant leaves. Always remove leaves as they are poisonous.  Rhubarb became popular in desserts when cooks in the late 1700’s could finally afford the sugar to sweeten the tart stalks. To use, rinse and chop rhubarb to make stewed sauces, crisps and pies. Rhubarb freezes well—simply sprinkle chopped pieces on a cookie sheet, freeze, then bag to extend the too short rhubarb season!

Author Jane Reid is passionate about locally grown BC foods. Her book, Freshly Picked: A Locavore’s Love Affair with BC’s Bounty, is filled with fascinating facts, personal stories, tips for buying, and preserving plus simple recipes. It is available at local bookstores and libraries in the Fraser Valley and online.