Prepared: August 20, 2008
“We couldn’t imagine doing anything else” said Donna Gilmore, when asked about why she likes farming. Both Donna and Wes were raised on farms and being involved in farming is what they see as both their life and their livelihood. “What other job has the variety of the daily life on the farm” said Donna, “although some more time off would be nice – time off is a real luxury that most farmers don’t see very much of” she said.
The Gilmores are fourth and fifth generation farmers on both sides. Donna’s family started as dairy farmers along with other local dairy farmers, to start Island Farms Dairies on Vancouver Island and they were potato growers until the nematode problem in the 1980’s forced them to stop growing . Wes’s family was dairy farming and growing potatoes in Richmond until the 1970s when some of the family moved to Barnston Island and continued to dairy and then started into the beef cattle industry in the mid 1970’s. They have been farming in their present location on Barnston Island since 1964 and the Gilmore’s still own land in Richmond and Donna’s family still farms in Central Saanich.
Painted River Farm on Barnston is 130 acres but the Gilmore’s also lease some additional land. They raise livestock – beef and boer goats. They raise natural beef from birth to the plate and their animals are all raised to SPCA standards. “We really like the idea of being held accountable for the quality of our products” said Donna. “With raising livestock there is nothing better than seeing all the new borns playing with each
other and enjoying life. When we see this and we know we are doing a good job”.
Painted River Farm is a family owned and operated farm. The Gilmores say it is a small operation where the focus is “on quality and not on quantity”. “We get to meet the people who are buying our meat and we can answer their questions, give them some tips on how best to prepare our products, and where they might get other local quality products from other area farmers”.
“It is a great life” said Donna. “I just wish we could get more time to rest”. 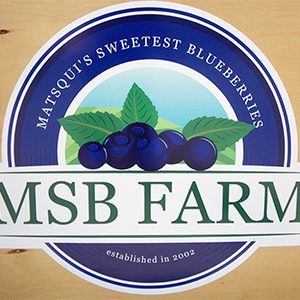 Our family owned and operated farm has been producing fresh, quality blueberries for over 25 years. Our blueberries are handpicked daily, and we offer four different varieties throughout the season. Enjoy complimentary recipe ideas, storing and freezing tips! MSB Farm … Continue reading →