Prepared: January 7, 2010
“I guess you could say we’ve been farming for quite awhile” said Dave Ormrod, when asked about the history of his farm in Langley. “Our farm is on 216th St. south of Milner. My father, John Ormrod, bought the farm in 1942 and the farm has been in Ormrod hands since then. As it happened, 1942 was also the year that I was born so it was an auspicious year!”
“It was a farm that really evolved over time” said Dave. “The early years were difficult as the land was very wet and my father spent many days digging ditches by hand and laying clay drainage tiles to improve the productivity of the soil. He had a love for tree fruits and planted around 50 apples, pears, peaches and cherries. It was the largest orchard in the vicinity and was used for annual pruning demonstrations for the local farmers. The operation soon became a ‘mixed farm’, typical of the area with dairying being the main enterprise. The dairy part of the farm operation lasted until 1960 when I left to take Agriculture at UBC. At that time my father left the dairy business. We also produced eggs for awhile and we had about 300 laying hens at the height of our egg production.”
“Farming has really been a big part of my life” Dave said. “I was the last of four children in our family and I was the one who stayed in the area to help on the farm. After UBC, I came back to Langley and bought an adjoining farm that had been neglected for years. However, I later sold that one and built a house on the family farm. Lucky for me, I was employed by the BC Ministry of Agriculture as a Plant Pathologist and that allowed me to help on the farm in the evenings and on weekends. I retired from the BC Ministry of Agriculture in 1997 and farming has been my main occupation since then. The farm now is just a little less than 35 acres and I also rent seven acres for hay and pasture from two adjacent small holdings.”
“We now have eight family members living on the farm and they help with various tasks from time to time but I do practically all the crop growing and selling because I enjoy the physical outdoor work. My wife, Sheila, does all the organizational work for the school tours with help from some of the other family members.”
“You know, some things you do in farming don’t always pay off”. Dave said, with a chuckle. “I have a herd of about 25 Simmental beef cattle that use more than half of the land but bring in nothing in the way of net income. Income-wise, the most important crops we grow are potatoes, apples, various vegetables, Christmas trees and hedging cedars. One of our children has a flock of exotic chickens as well as ducks, turkeys and guinea fowl. Another has goats, sheep, rabbits, pot-bellied pigs and an alpaca. I think they are all money-losing propositions but I don’t let on in case someone asks why I am raising beef cattle!”
“Most of our produce is sold directly to the public who appreciate being able to buy fresh-picked fruits and vegetables from someone they know and trust. Customers are constantly thanking me for growing such good food for them and their families. That makes me feel good. Sheila conducts tours for school children in September and October. The children are able to see how everything is grown and they can pick a bag full of goodies as they walk around the farm. Parents have told me that their children will only eat Dave’s carrots and beans. Our farm tours are consistently rated as the best for children in the Play-School to Grade-Two age group” said Dave. 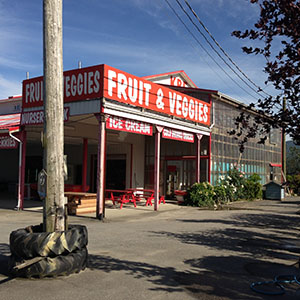 KBF Nursery and Farm Market has been a family owned and operated business since 1980. We are one of the largest farms in the heart of the Fraser Valley, growing over 400 acres of fresh berries, produce, and nursery stock. … Continue reading →